In 1906, Italian economist Vilfredo Pareto created a mathematical formula to describe the unequal distribution of wealth in his country, observing that twenty percent of the people owned eighty percent of the wealth. In the late 1940s, Dr. Joseph M. Juran inaccurately attributed the 80/20 Rule to Pareto, calling it Pareto’s Principle. While it may be misnamed, Pareto’s Principle or Pareto’s Law as it is sometimes called, can be a very effective tool to help you manage effectively.

After Pareto made his observation and created his formula, many others observed similar phenomena in their own areas of expertise. Quality Management pioneer, Dr. Joseph Juran, working in the US in the 1930s and 40s recognized a universal principle he called the “vital few and trivial many” and reduced it to writing. In an early work, a lack of precision on Juran’s part made it appear that he was applying Pareto’s observations about economics to a broader body of work. The name Pareto’s Principal stuck, probably because it sounded better than Juran’s Principle.

As a result, Dr. Juran’s observation of the “vital few and trivial many”, the principle that 20 percent of something always are responsible for 80 percent of the results, became known as Pareto’s Principle or the 80/20 Rule. 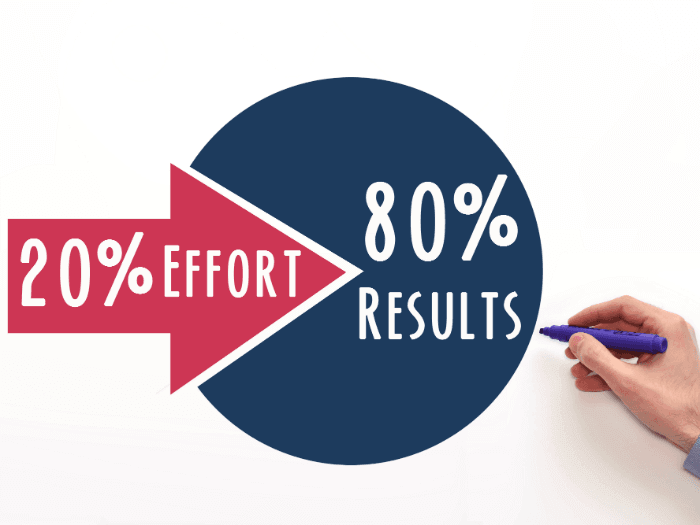 How it can help you

The value of the Pareto Principle for us is that it reminds you to focus on the 20 percent that matters. Of the things you do during your day, only 20 percent really matter. Those 20 percent produce 80 percent of your results. Identify and focus on those things.

Pareto’s Principle, the 80/20 Rule, should serve as a daily reminder to focus 80 percent of your time and energy on the 20 percent of your work that is really important. Don’t just “work smart”, work smart on the right things.

Increase Traffic and Brand Image of Your Blogs

What About Pyramid Schemes?