When I visited Holiday World Theme Park in Santa Claus, Indiana I thought rain might cause me to cancel my visit to this park. As I drove through the picturesque roads leading to the park the rain began to subside and by the time I arrived in the parking lot there was only a fine mist left in the air. The cool temperatures and light rain kept the crowds small, but there were still quite a few families enjoying the beauty of the park and the short ride lines.

Holiday World is a beautiful family oriented park nestled in a beautiful hilly wooded area. The nation’s first theme park created in 1946 by Evansville, Indiana industrialist Louis J. Koch originally was called Santa Claus Land. Over the decades, Santa Claus Land grew and flourished and under the leadership of Louis’s son, Bill, the park expanded from a Christmas theme to include Halloween and Fourth of July sections, and the park’s name was changed to Holiday World. Today, Holiday World, led by the third generation Will Koch, features 100 acres of rides, shows, games, and attractions. In 1993, a whole new park was added with Splashin’ Safari Water Park. Throughout its half-century of existence, Holiday World has set high standards for the theme park industry, with beautiful grounds and landscaping, plus a steadfast adherence to the values established in the company’s cornerstones: safety, service, cleanliness and friendliness. 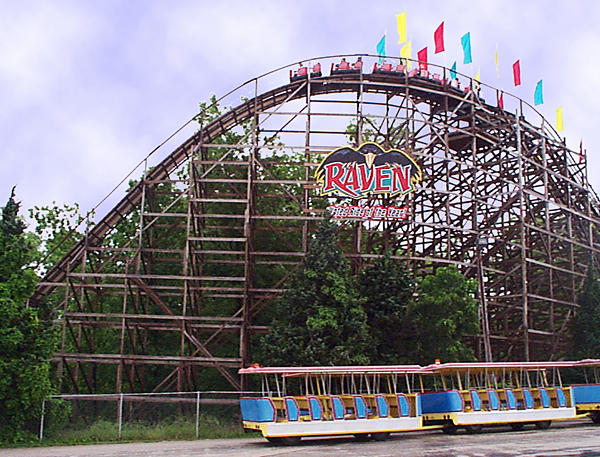 The park is really beautiful and has a good blend of rides, a petting zoo, and Waterpark to attract the family.

The park personnel are very friendly and helpful and the grounds are kept spotlessly clean. Santa can also usually be found checking on whether the kids have been naughty or nice. Holiday World has 4 themed sections (Christmas, Halloween, 4th of July, and Spashin’ Safari.) A new public campground is also available at Lake Rudolph Outdoor Resort, adjacent to Holiday World. “Our sites are Class A, with complete hook-ups, plus access to the resort’s pool and other facilites,” according to Holiday World & Splashin’ Safari President Will Koch. I would recommend this park to anyone traveling through this area and coaster fans absolutely must ride the Raven.

To celebrate its 50th season, Holiday World introduced The Raven, a $2 million wooden roller coaster, the largest in Indiana and Kentucky. Ranked #3 Coaster on the Planet by the readers of Inside Track, The Raven, a world class wooden CCI Terrain Coaster built in 1995 is truly action packed with non-stop excitement and a combination of high speed transitions over a half a mile of track at speeds up to 60 miles per hour. 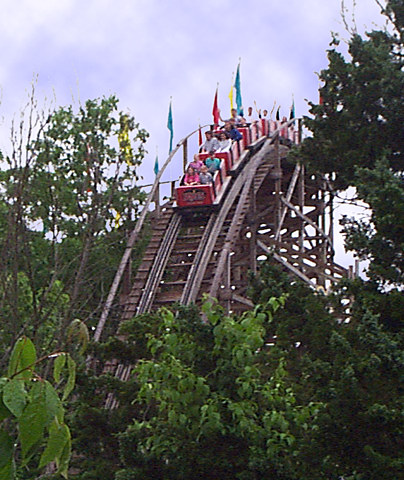 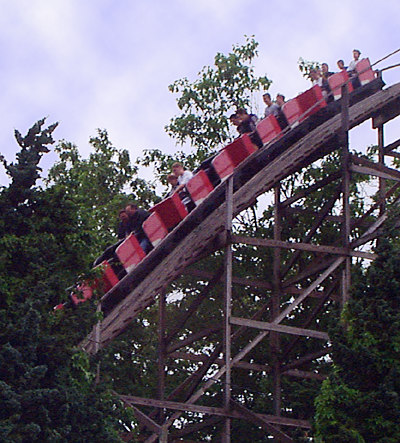 The Raven is a really fun coaster with elements to please every coaster fan. From the first 85 foot drop into a 120-foot tunnel, then a second 61-foot drop before sweeping over Lake Rudolph followed by another small drop before the infamous Drop 5, the “ejector seat,” through an S-curve and quick turn to the brakes upon returning to the loading station, this ride is packed with white-knuckle action, lateral G’s and plenty of air time.

My first nearly 2 minute ride in the front seat gave me a good view of the track as we raced up to 60 miles per hour through the thickly wooded area. The speed of the coaster seems to increase as the ride progresses, especially through the sweep over Lake Rudolph and accentuated as you race through the trees The Raven is built in and around. My second ride in the back seat yielded much more air time and the famed surprise “ejector seat” 5th drop was great from this seat. 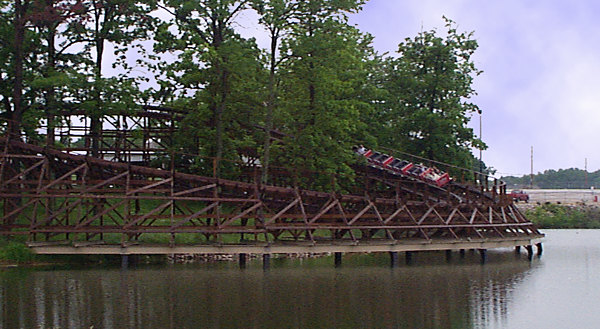 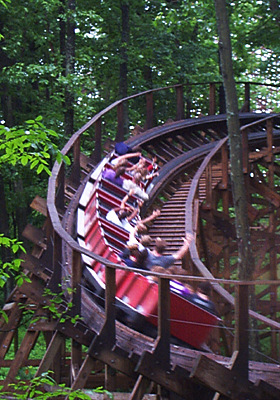 The single red PTC train has 6 cars with 4 people per car with a ride capacity of 700 guests per hour. The fairly comfortable cars have no headrests, low seat dividers and traditional lap bars and seatbelts.

Roller Coasters added since my visit in 1997:
The Howler (1999 )is a family steel roller coaster.
The Legend (2004) wooden roller coaster
The Voyage (2006) wooden roller coaster. With a track 1.2 miles long and reaching speeds up to 67.5 mph, The Voyage is among the world’s top three longest and fastest wooden coasters. “The Voyage is an air-time machine, with riders experiencing a feeling of weightlessness for a total of 24.2 seconds,” says Will Koch, the parks’ president.
Thunderbird (2015) is a steel roller coaster designed by Bolliger & Mabillard It is the eighth Wing Coaster in the world and the fourth in the United States.

This ole Body Just Ain’t What it Used to Be