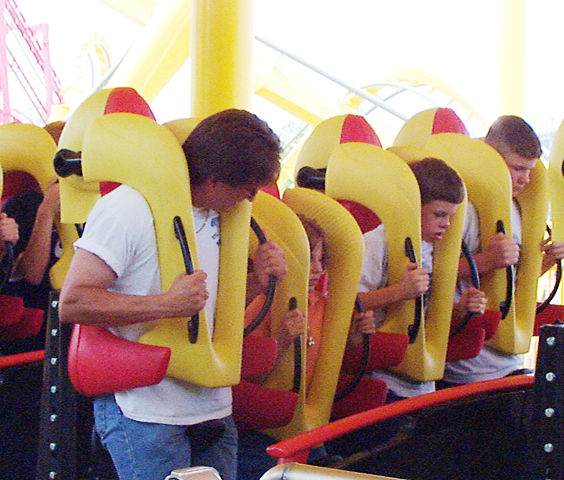 Six Flags announced in 2010 that as it nears the scheduled end of its restructuring process, it has decided to reject its lease with the Kentucky State Fair Board relating to the Kentucky Kingdom park. Six Flags had proposed a new lease arrangement to the fair board that would have enhanced the viability and future of the park. Unfortunately, those proposals were not accepted and the park ceased operations. 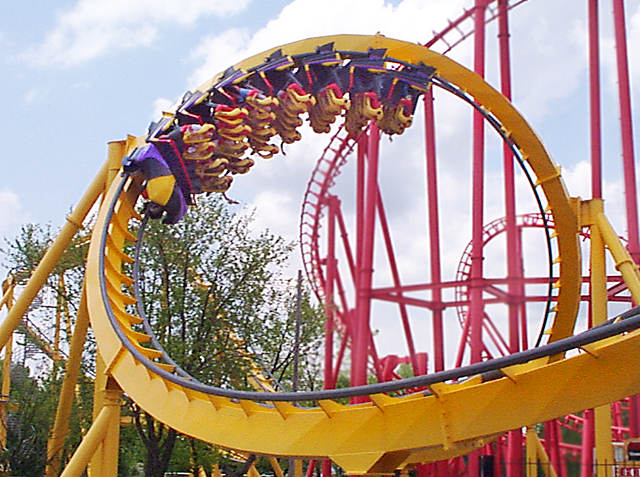 Kentucky Kingdom and Hurricane Bay reopened on May 24, 2014. 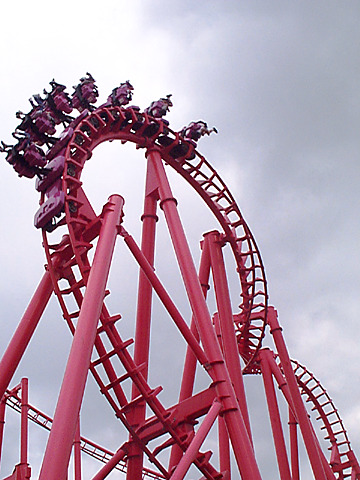 Now get ready to experience
a new dimension in fear…

T² or T squared—as in terror to the second power, (1995) is a Vekoma SLC looping inverted roller coaster with 5 inversions, 2 corkscrews, and a vertical loop reaching speeds up to 60 mph. The 98-foot tall T² was the first Vekoma SLC (for Suspended Looping Coaster) in North America.

The ride has been refurbished, renamed to T3 and reopened on July 3, 2015. 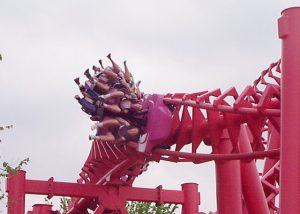 This adrenaline-pumping looping thrill ride is very disorienting with no dead spots. I was surprised at the amount of negative G’s experienced as I was lifted out of my seat and into the shoulder harness numerous times. (The next morning I noticed a slight bruising to the front of my shoulders presumably caused by the shoulder harness on T².)

It’s been recommended to ride this early in the day as it gets rather rough by evening. I found this to be true as my early ride was much smoother with less headbanging than the ride later in the afternoon. I waited only 20-30 minutes to get a front seat on T². My only complaint with T² is that it is too short (1:36). 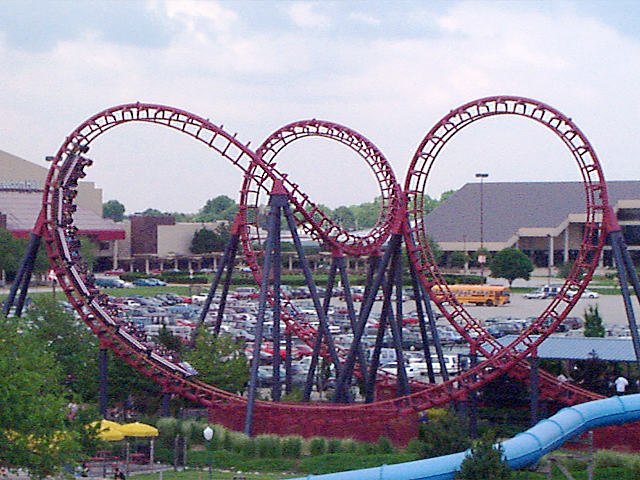 The Vampire (1990) – This Vekoma Boomerang is a fun ride and not too unlike other Boomerangs around the country. You are pulled up the first lift and suddenly released with a similar experience as some of the drop rides. You then rocket back through the loading station and through a loop, a boomerang, another loop where it seems to almost stop at the top, and then up the second lift hill where you are pulled again to the top and released to run through the track backwards. In all, there are 8 inversions, lots of positive and negative G’s, pretty good speed, and an overall exciting ride. The backward trek through the track was certainly more exciting than the forward with the G forces throwing you forward in your seat against the harness. I had hardly no wait to get a front seat ride on the Vampire.

The Vampire has since been removed in 1999 because of multiple breakdowns and moved to Six Flags New England where it is known as Flashback. 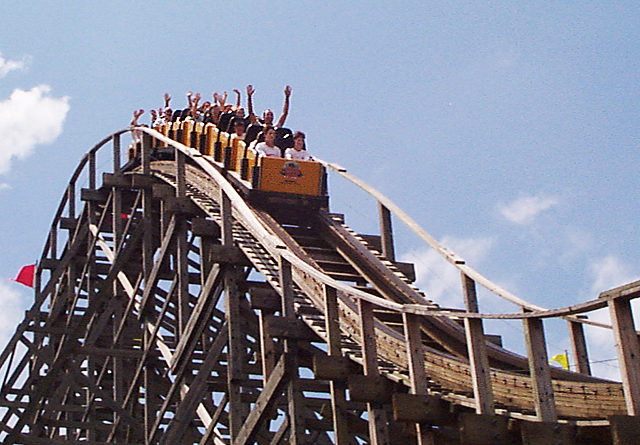 Thunder Run is a Summers/Dinn Double Out & Back wooden coaster built in 1990. The Hurler coasters at PKD and PCWinds are mirror images of Thunder Run.

While not having the long drops that some people enjoy, this coaster does have three low-to-the ground, highly banked 70-degree speed turns and pretty good air time. I waited only 10-15 minutes to get the front seat on Thunder Run.

Roller Coasters added since my visit in 1997:

Twisted Twins (1998) is a custom designed, one-of-a-kind Custom Coasters International roller coaster consistently rated as one of the most thrilling wooden roller coasters in the world. This dueling wooden roller coaster, originally named Twisted Sisters, with dueling twins Stella and Lola, you’ll roar through the ten-story drop and 70° bank turns.
Road Runner Express (2000) is for the beginning coaster enthusiast, with eight four-passenger cars, sitting two abreast, both with lap bar restraints. Individual cars ensure that every passenger experiences the thrill of being in the lead car of a traditional coaster train.
Greezed Lightin’ (2003) propels riders from zero to 60 m.p.h. in less than six seconds through a 76-foot-tall loop, then goes up a 70-degree incline, and backwards through the loop.  Taken out to make way for Lightning Run in 2014.
Lightning Run (2014) is a Hyper GT-X roller coaster from Chance Morgan.