Being a native of Wichita Kansas, this roller coaster was the one I cut my teeth on as a kid and rode many times up through young adulthood. 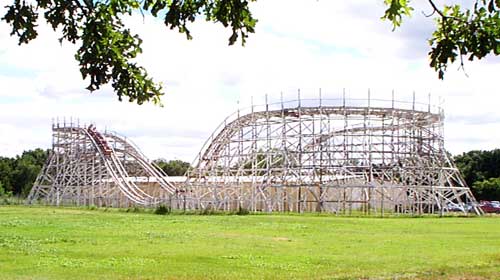 I still remember the terror I felt cresting the top of the lift hill and facing that downward plunge.  Funny, but years later when I rode it as an adult, it seemed so tame.

Sadly, the Roller Coaster and Joyland Amusement Park has since closed.

This was my first roller coaster to ride after a many year hiatus and what re-ignited my passion for thrill rides.  I stumbled upon this coaster one day I was driving into Phoenix from where my parents lived in Sun City West.  Just seemed to be the right thing to do on a hot summer day. 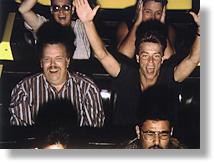 I was attending a trade show in Minneapolis, when after all the booths, lectures and presentations were over, I felt compelled to visit this park and ride its roller coaster. 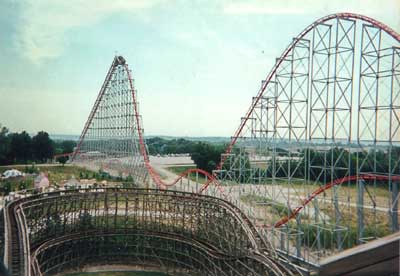 Mamba – Morgan Hyper-coaster
With the first hill over 200 feet high and reaching speeds up to 75 mph, MAMBA® is one of the tallest, longest and fastest roller coasters in the world.

Prowler (2009) – A new thrill ride called “The Prowler” hit Kansas City’s Worlds of Fun amusement park. The $8 million wooden coaster takes about a minute-and-a-half to ride. Like all roller coasters, it starts out high and has a big plunge. Once the ride gets going, the roller coaster runs low to the ground. The Prowler makes its way through the woods in the back side of the amusement park, making it reminiscent of the popular “Zambizi Zinger” ride that was a Worlds of Fun original.

Patriot (2006) – The longest and tallest inverted roller coaster in the region! The inverted PATRIOT delivers two minutes and 18 seconds of the ultimate amusement park adventure by exposing riders to height, speed and a seamless transition of gravity-defying elements. Hanging beneath the track, thrill-seekers climb a 149-foot lift hill, then plunge down a 123-foot curved drop reaching a speed of nearly 60-MPH. Riders are disoriented as they fly through seven gravity-defying elements, including an 89-foot vertical loop, a zero-gravity roll, an Immelmann loop, an inclined banked curve, an s-curve, a corkscrew, and a high-speed spiral. 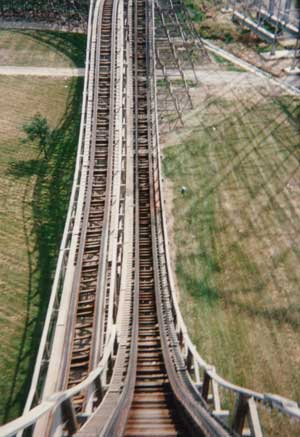 Boomerang (2000) – After boarding a Boomerang train, riders are pulled backwards to the top of a nearly vertical 12-story tower and then released to plummet at nearly 50 miles per hour down a steep hill. They turn and go through two corkscrew turns and a vertical loop, flipping upside down three times. Riders then head up another nearly vertical 12-story tower where the whole trip begins again… in reverse!

Timber Wolf (1989) – Summers/Dinn Twister. This 100-foot tall coaster is ranked as one of the best coasters built in the 1980s. It features an uphill helix, lots of air time and a top speed of 52 mph.

Detonator – Twin-tower free fall. Although this is not a rollercoaster, it was sure a fun rush. 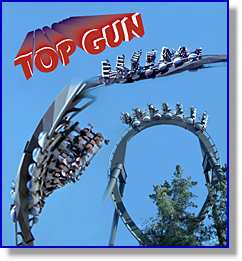 Top Gun was the first inverted coaster I’d ridden and it was the coolest coaster I’d ridden. The sensation of the inverted configuration is like no other coaster experience. It was this coaster that solidified my fascination with roller coasters and really began my search for the ultimate coaster.

Other coasters worth mentioning at California’s Great America, now owned by Cedar Fair, in Santa Clara, Calif. include the steel Loop-Screw Demon, the double out & back wood Grizzly, and the standup loop-screw Vortex, the suspended, inverted boomerang coaster Invertigo, the world’s first and only true flying coaster, Stealth.

Taking full advantage of the DVD format, this installment of the Roller Coaster Thrills series offers viewers a choice of two camera angles for each of the 20 rides captured on this disc. Anticipate the fear of that initial heart-stopping plunge with a first-person perspective, or face backward and watch the reactions of the riders–either way, it’s a great ride. The virtual tour across U.S. theme parks includes old-fashioned woodies, dual-track looping coasters, and colossal steel mega-coasters with 300-foot drops. Many of the featured coasters were built in 1999 and show off the latest advances in roller coaster engineering; in fact, one launched coaster has apparently garnered interest from NASA engineers for the speed of its propulsion (0 to 60 mph in under 3 seconds). The disc is also packed with special features: amusement park histories, interviews with roller coaster designers, behind-the-scenes insights from director Ned Rodgers and director of photography Dave Cutler, plus Dolby Digital and DTS surround sound, and bonus footage of the first combination roller coaster and water ride. –Larisa Lomacky Moore

This ole Body Just Ain’t What it Used to Be