It’s bright yellow color dwarfs nearly everything else in the park with possibly the exception of the 150-foot tall Giant Wheel or bright red T2 coaster. In 2002, the track was repainted electric lime and the support columns violet. In March 2006, the track was returned to the original yellow color, while the supports were painted royal blue. 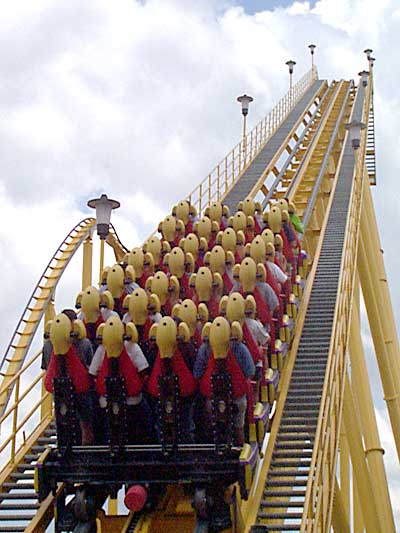 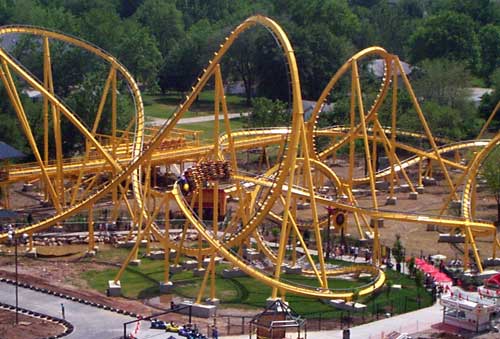 Chang makes excellent use of the queue where as you anxiously await your chance to experience this mind-bending stand-up coaster as you take in Chang’s hugely complex course. The queue provides you an excellent vantage point to build your anticipation as you wind through and under the complex track. Just as you begin to get comfortable with your place in the queue a train roars through an inversion directly overhead reawakening your excitement.

Chang is one of the most awesome looping thrill rides featuring a 144 foot drop and five inversions including a 121-foot tall vertical loop, a 103-foot tall diving loop, and a 72-foot tall inclined loop. It also has two flat-spin corkscrews and a high-speed spiral. It’s 4,155 feet of track will take you up to 63 miles per hour where you’ll experience a G force of 5.

It took only about 30 minutes to get my first opportunity to stradle that bicycle seat and pull down the shoulder harness in the front car where I was able to enjoy the completely unrestricted view as we raced around the bright yellow steel track. A later ride was taken from the back where the experience is totally different. Being unable to see the elements before entering them makes it more of a surprise.

After cresting the 144 foot lift hill, there is a small dip in the track not felt too much in the front seat, but from a back seat the sudden drop comes as a bit of a surprise. You begin with a left swoop turn and down the first straight drop into the 121-foot tall vertical loop followed by a 103-foot dive loop. Coming out of the loop you enter an upward zig-zag into a tight spiral element B&M calls a “high-speed carousel.”

Next you rush into a 72-foot high inclined loop followed by twists to the left and right. You then climb a small hill and turn into a brake run.

But wait, it’s not over yet! There is a sudden deep drop followed by a corkscrew into a curve one way and then another followed by a tight banked turn and into a spiraling dive loop, another corkscrew, and a drop. You then slow down after 2 1/2 minutes in a turn back into the loading station.

This coaster is really fun and incredibly smooth. It’s longer ride is also greatly appreciated. Kudos to Kentucky Kingdom for putting in this coaster as they solidify their thrill ride prominence for coaster fans. More photos of Chang

In 2009, Six Flags Kentucky Kingdom announced it was dismantling their signature roller coaster, Chang, to make room for a new water park. Chang was relocated to Six Flags Great Adventure and began to operate as the Green Lantern replacing Great American Scream Machine for their 2011 season.