The People of Barbados 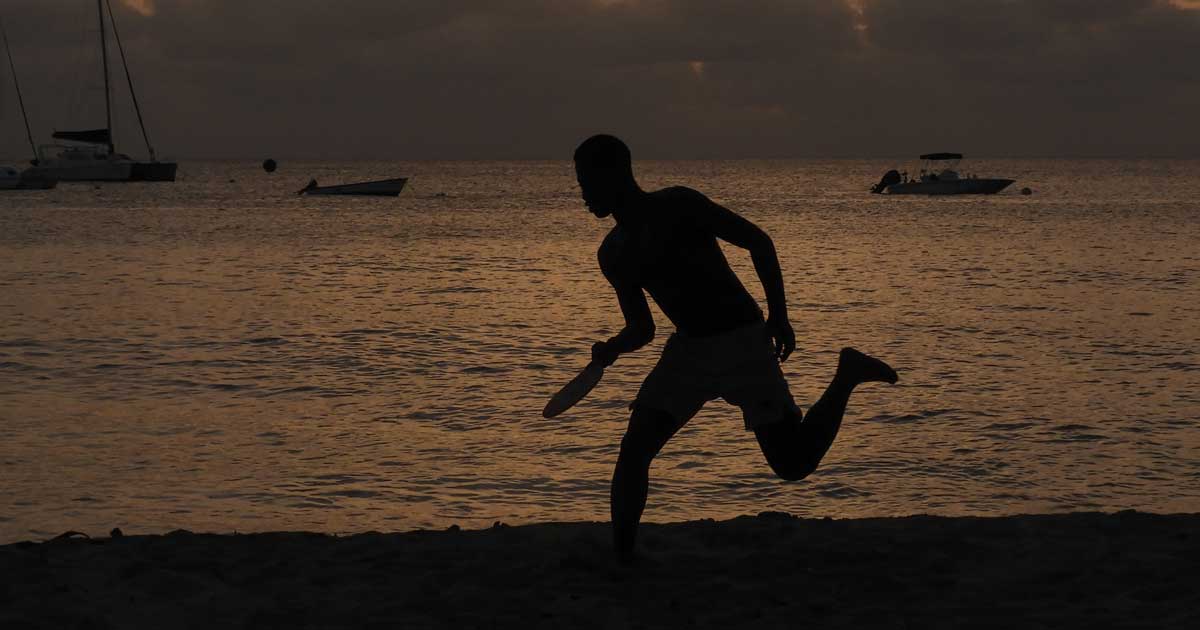 Barbados was discovered in 1536 by the Portuguese, and 90 years later it was colonized by the British.
It became an independent member of the Commonwealth in 1966 after being a British colony for over 300 years.

The Barbodos population of 287,010 is predominantly of African descent, citizens officially called Barbadians. The localized pronunciation of the word Barbadian is “Bajan” (pronounced BAY-jun).

Close to 90% of all Barbadians are of Afro-Caribbean descent (“Afro-Bajans”) and mixed descent. The remainder of the population includes groups of Europeans (“Anglo-Bajans” / “Euro-Bajans”) mainly from the United Kingdom, Ireland, Germany, and Italy.  Most Barbadians of African and European descent are Christians (95%), the largest denomination being Anglican (40%). 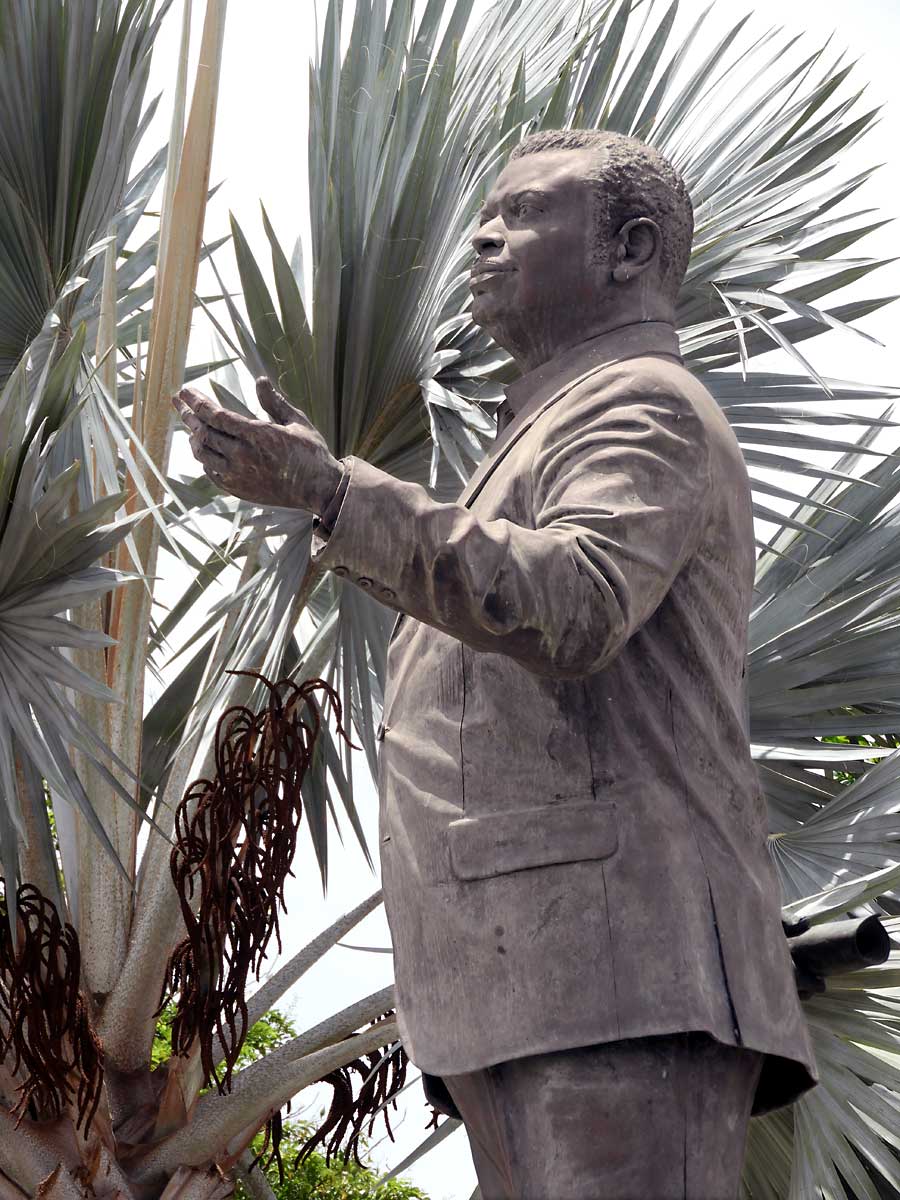 As compared to the other adjoining islands, the impact of the English on this island is quite noticeable. For example, the national sport of this island is cricket. Introduced to the island almost 200 years ago by the British as a character builder, cricket now has no class boundaries, and Barbados has produced many heroes: Famous players like Garfield Sobers and Frank Worrell are proud citizens of this island. I had not personally experienced this sport before and it was interesting to watch the game played. The game of cricket has been described as “like abstract art – you only understand it when you have watched it for a long time.” 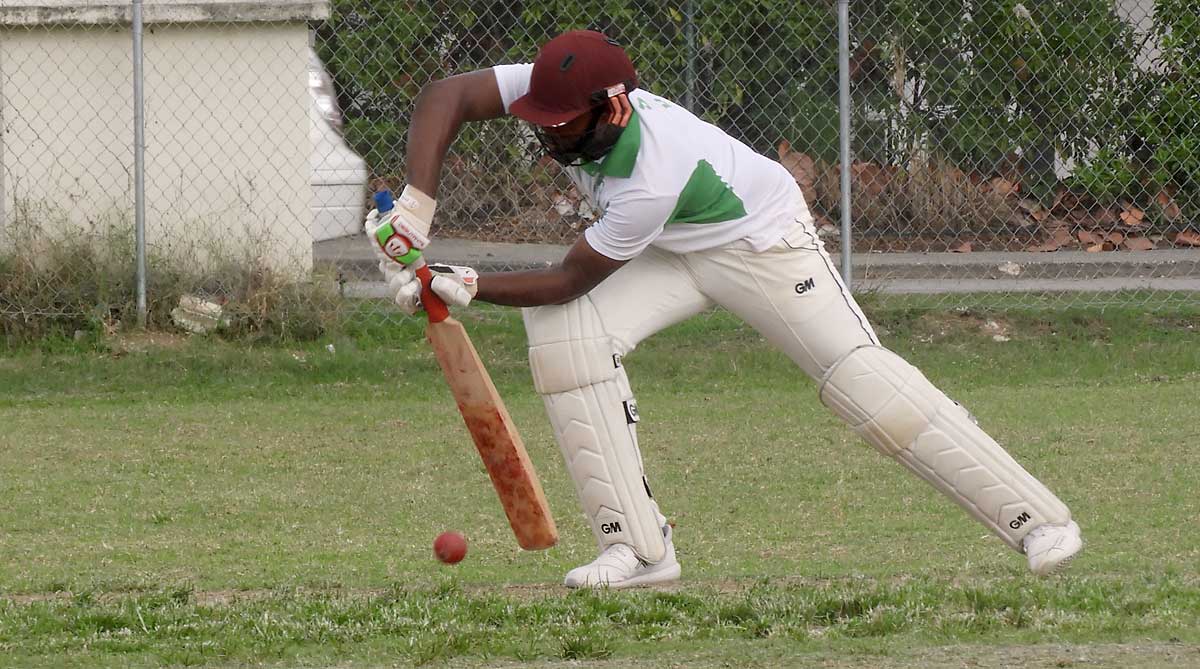 The game most often played in Barbados is dominoes. You’re likely to find any time during the day or night a game of dominoes being plaid. Whether in a rum shop or wherever you find a gathering of people, you’ll find somebody in quiet concentration or sometimes very animated and theatrical as they slam dominoes onto a board. 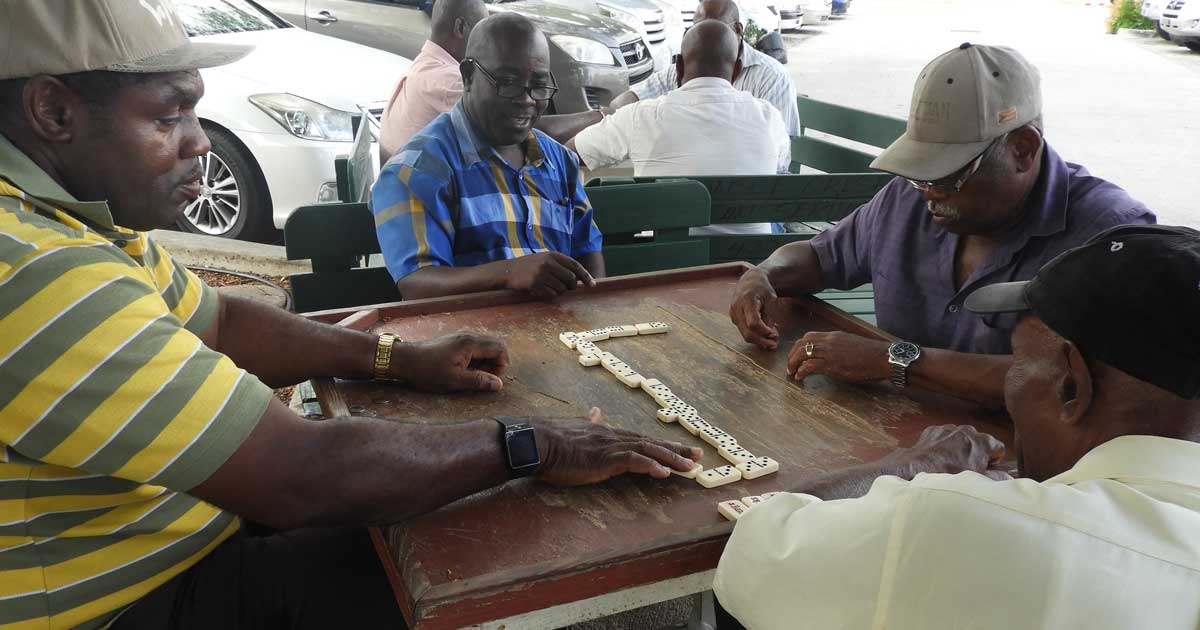 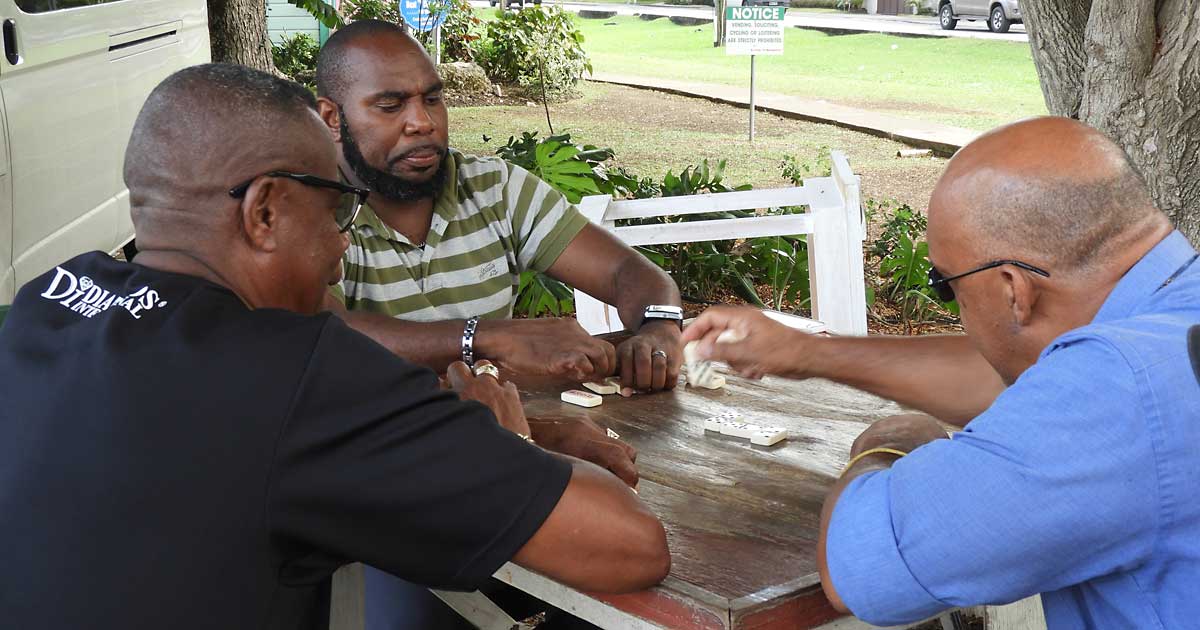 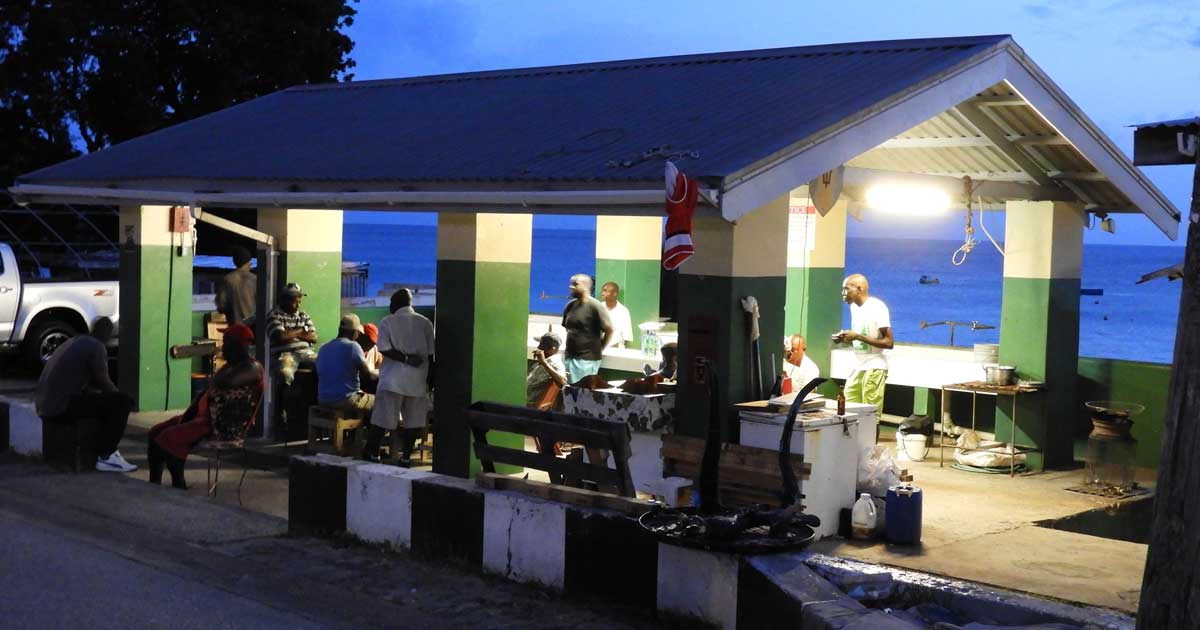 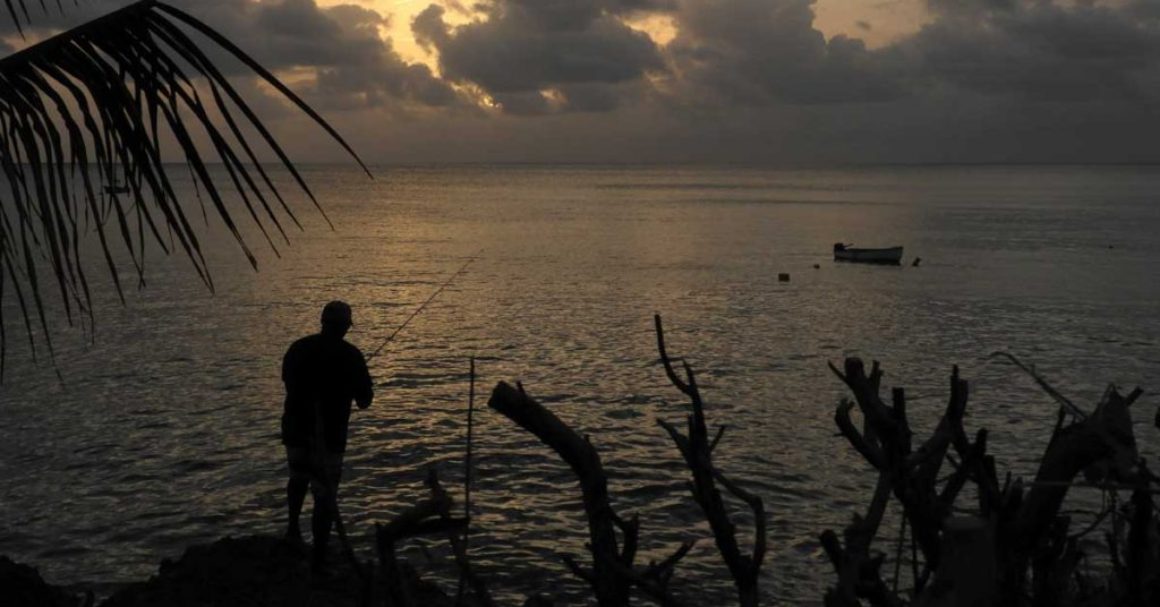 You really get the feeling Bajan’s are really connected to the sea.  Fishing villages abound.  Fish markets are plentiful.  And fish is the food of choice in restaurants.

If you’re in Barbados on a Friday, you won’t want to miss the Oistins Fish Fry. 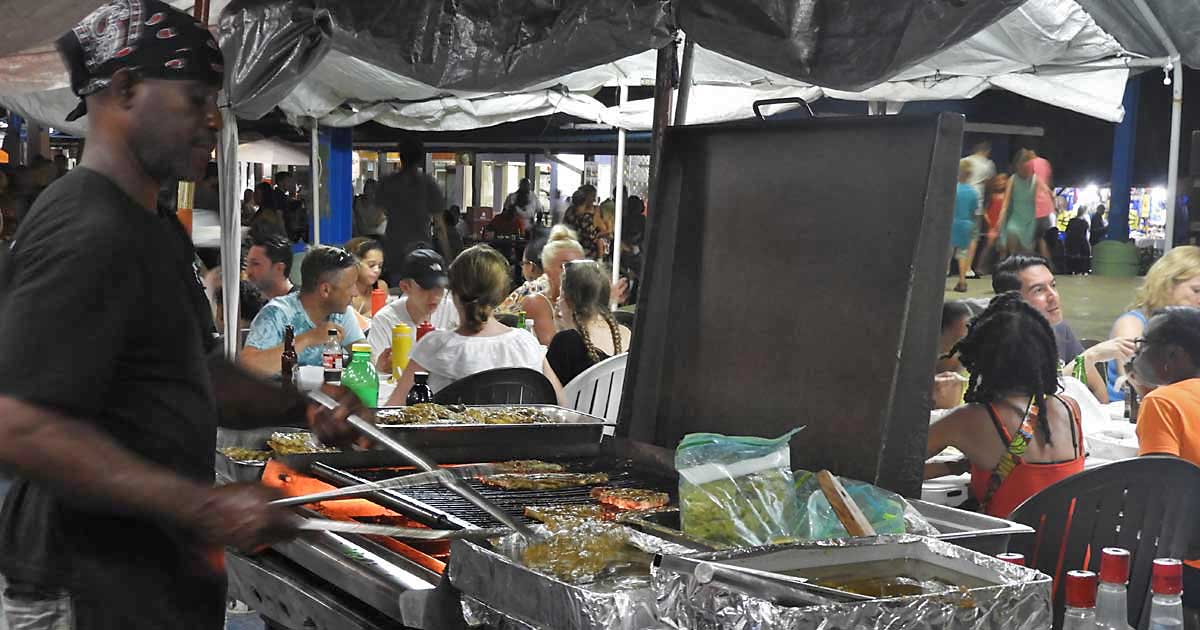 Water oriented activities abound in Barbados.  Ships and boats of all sizes readily allow you to have fun while exploring the local marine life. Relaxing in the sun on the beach is also a favorite. 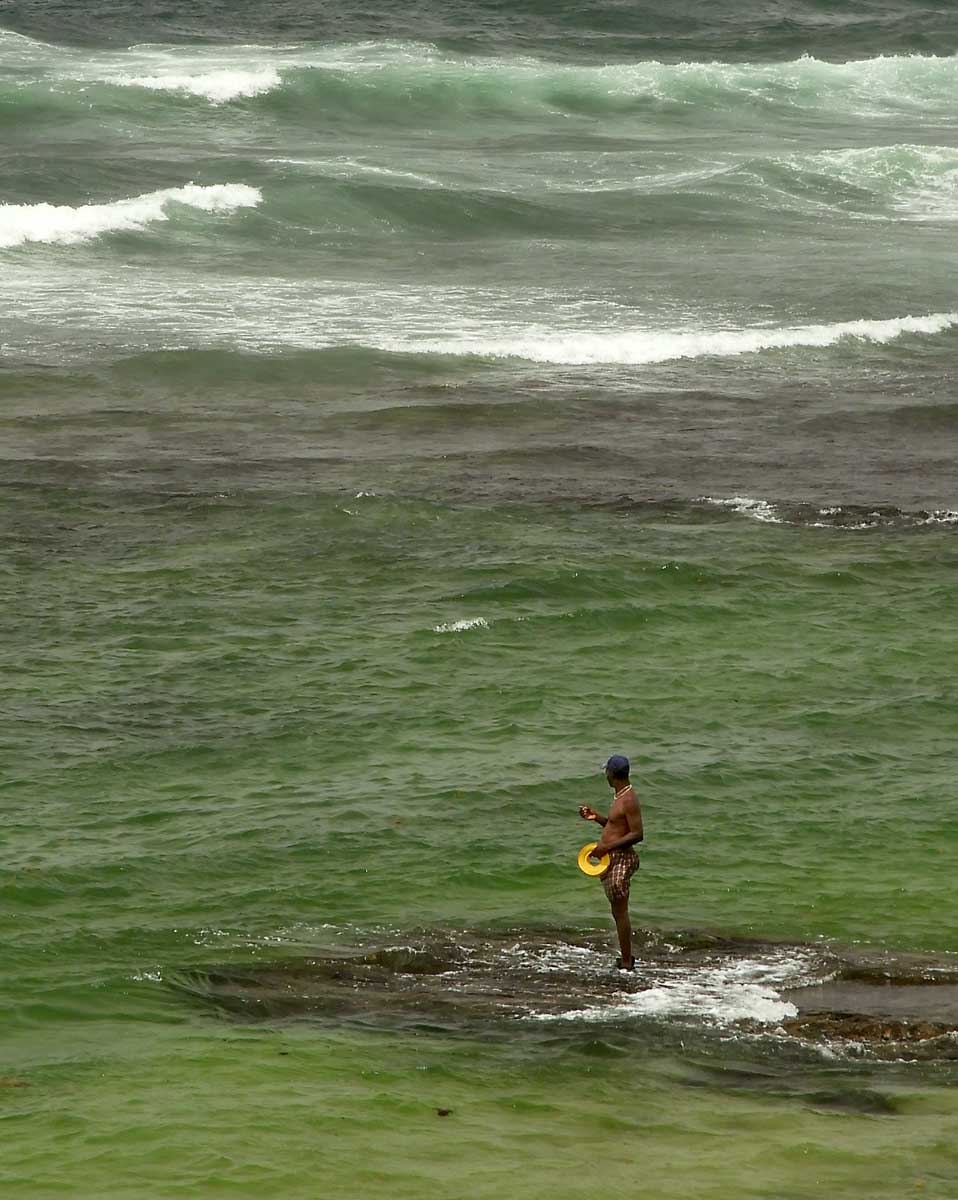 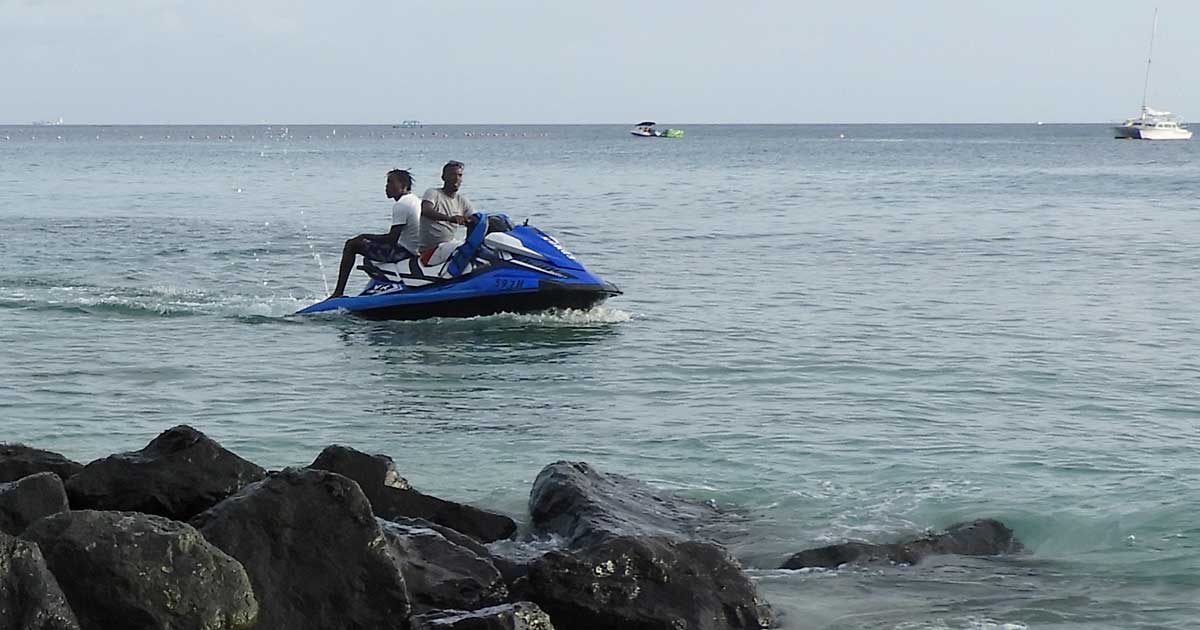 Like many Caribbean countries, the Bajans are colorful and interesting people.  Whether it’s their colorful speech, their engaging looks and their enless energy and love of life, the people of Barbados are among the most friendly people I’ve encountered anywhere.  They are like children who will never grow old.  No matter their age, they insist on having fun.

Nearly everyone I encountered would happily talk with you.  Even the beach vendor will happily discuss the meaning of life with you, and they often have a rather inspired point of view.

Art produced in Barbados tends to be reflective of the way of life on the island and what it has to offer. Artists and craftsmen are found across the island with an amazing blend of various talents in a variety of styles and medium.

I found the people of Barbados to be very friendly. They were usually eager to help the tourist and make them feel welcome. Tourism is, after all, one of the most important industries in Barbados.

Even though I was clearly a minority in Barbados, I felt perfectly comfortable.  There was only once I experienced any kind of racism, and that was not directed at me… it was some dude in the distance chanting “black power”.

Language is no problem, English is the official language of Barbados and is used all over the island.  In its capacity as the official language of the country, the standard of English tends to conform to vocabulary, pronunciations, spellings, and conventions akin to, but not exactly the same as, those of British English.  The Bajan dialect is an iconic part of the Barbadian culture.

Open air markets abound in Barbados stocked with all sorts of fresh produce and fish.  The sellers in the markets are very friendly and helpful in choosing your morsels.

I especially like this photo of a woman in the market.  Her shy young child peered out from behind her as if to check me out.  Mama was quite friendly and young missy eventually felt safe to come out to meet me.

Of course, children everywhere were playful and more than eager to pose for my camera.

Sprinkled among the population of Barbados is a sizable expatriate community – primarily from the United States and Great Britain – made up of international civil servants, businesspersons, and retirees.  I found a butcher near where I was staying that was very helpful in obtaining meat for my meals. She and her husband had immigrated from Australia.

One incredibly helpful guy I met in Barbados was Raf (8P6RR).  Originally from Guyana South America, Raf migrated to Canada in the early 1990’s and has been based in Barbados with the Canadian High Commission since 2013. He is the owner, webmaster, and admin for BarbadosHamRadioClub.com.

Barbados is an island of carnivals and cultural events.

One of the country’s most popular and largest annual cultural tradition is Crop Over.

Beginning in June, Crop Over now runs until the first Monday in August when it culminates in the finale, The Grand Kadooment.

This annual multi-week summer festival originated in 1780, when Barbados was the world’s largest producer of sugar and was the celebration of the sugarcane harvest. Thes festival came to an end with the decline of the sugar industry in the 1940s. In 1974 this festival was again revived, and today it is celebrated with a lot of fanfare.

Crop Over is a very colorful festival with with a variety of public and privately held events occurring throughout the festival.

One of the major public features held is the calypso competition with numerous competitions mostly on weekends. One of those displays of calypso music is Pan Pun De Sand, billed as the largest street party of the year.

This Crop Over event incorporates the fullness of beach life along with the alluring rhythms of sweet steelpan music.  Pan Pun de Sand takes place at Brandons Beach that is perfect for lazing, sunbathing, and swimming.

The climax of the Crop Over festival is Kadooment Day celebrated with a national holiday when masquerade bands and revelers dressed in sequin costumes decorated with colorful feathers, jewels, and bright accents fill the streets dancing behind music trucks and moving bars.

From early morning starting at the National Stadium until the last band reaches the Spring Garden Highway, an estimated 15,000 revelers parade through the streets of St. Michael. Soca/calypso music blares and couples twerk in a seemingly endless parade of colorful costumed bodies.

Folks come out early to stake out and set up their spots along the route.

Spectators and revelers of Grand Kadooment, who are not registered with a Carnival Band,  view the beautifully costumed Masqueraders from along the Route. Food and drinks are sold roadside, so you can enjoy the spectacle as they pass by with their massive music trucks, usually with Deejays and Live Bands to entertain the huge crowds.

Barbados is world-renowned for its beautiful beaches, favorable climate, hospitality and safety, naming only a few reasons why Bajans are proud and why you should visit.

Documenting What I See Bird Watching

Birdwatching has become an interesting and fun past-time